This one is kind of hard due to my skill level in Greek (novice).  There are at least three layers of complexity, but we observe some key things based on how this word is translated in some key locations.

As a result of these complexities, I will only attempt to point out some key items along with some doubt in my ability to fully and thoroughly analyze this term.

Of the two senses of this word a) leading b) thinking, considering, regarding, or esteeming,  we are primarily interested in the first one a) leading.  It is quite clear that the other sense (thinking, regarding, etc) of this word should not come into our consideration and should not influence the way we think of the use of hegeomai in Hebrew 13:17.  All of the cases that are translated to “lead”, “leader” or “ruler” are present participle forms of hegeomai, while other mood and tenses tend towards the other sense of hegeomai (thinking, regarding, etc).  Based on my reading of lexicons it appears that the present participle construction vs. other grammatical constructions is one of the primary things that distinguishes between the two senses of the word.

Consistency and Analysis of the Translation of Hegeomai

Breakdown of Occurrences of Hegeomai in the Bible 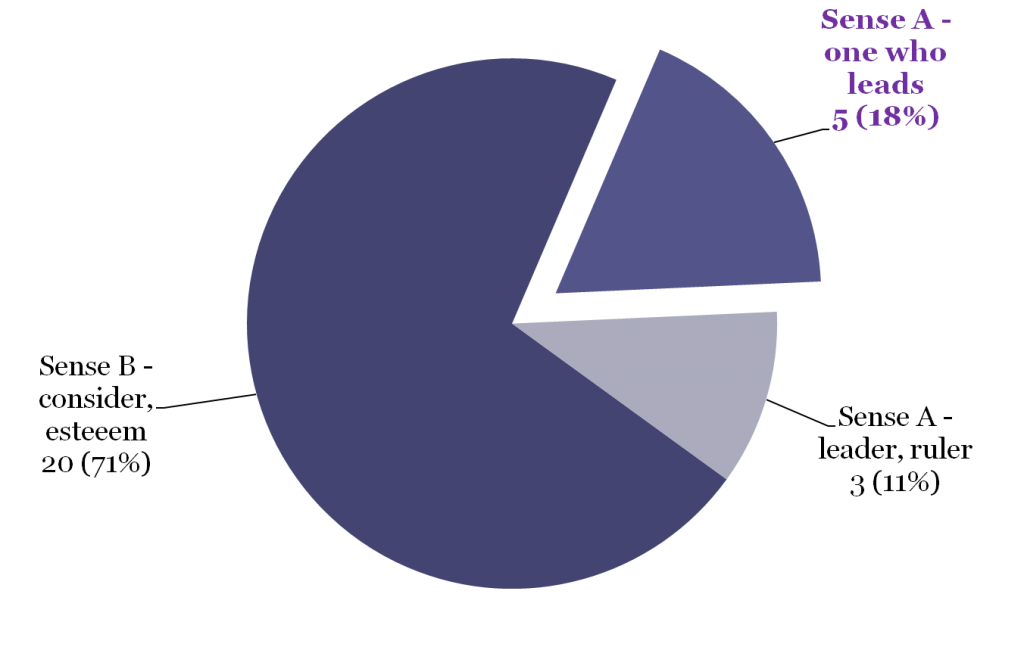 There are 28 occurrences.  Keep in mind the two major senses of this word as described above.  There is one sense that is (A) “to lead” and the other which is (B) “to consider, deem, account, think”.  Hebrews 13:17 uses “leaders” or “them that have the rule over”.

Since we are focused on only one sense (to lead) of hegeomai for Hebrews 13:17, we end up with a pretty short list of verses.  We can look at all of them and make a few observations.

Firstly, we can say that the sense of hegeomai that we are interested in is translated pretty consistently into English.  There are no major issues with consistency.

Hebrews 13:7 – Remember your leaders (ho hegeomai), who spoke the word of God to you: considering the outcome of their way of life, imitate their faith.

Hebrews 13:17 – Obey your leaders (ho hegeomai) and submit to them, for they keep watch over your souls as those who will give an account, so that they can do this with joy and not with groaning, for this would be unprofitable for you.

Hebrews 13:24 – Greet all your leaders (ho hegeomai) and all the saints.  Those from Italy greet you.

Matthew 2:6 – ‘And you, Bethlehem, land of Judah, are by no means least among the rulers of Judah, for from you will go out a ruler (hegeomai) who will shepherd my people Israel’

Acts 7:10 – and rescued him from all his afflictions and granted him favor and wisdom in the sight of Pharaoh king of Egypt.  And he appointed him ruler (hegeomai) over Egypt and all his household

Acts 15:22 – Then it seemed best to the apostles and the elders, together with the whole church, to send men chosen from among them to Antioch with Paul and Barnabas–Judas who was called Barsabas and Silas, men who were leaders (hegeomai) among the brothers

Even though Acts 14:12 which is translated as “principal speaker” has the same sense that we are looking at, it is not considered because this clause is from multiple Greek words.  It does not add too much or take away too much from our study.

In our analysis of leader(s)/rule(rs) including both Analysis #1 and Analysis #2, close attention is called to a Greek verb being turned into an English noun.  To many readers, this may not seem to matter much.  In fact, the difference is subtle and would not be all that important if it didn’t have a larger cumulative effect throughout the Word of God.  The more that all phases of leadership are “nounified” in the Word of God the more possible it becomes for christian leadership to take advantage of a positional status to exercise authority.  This is the kind of subtle shift that the Enemy of God uses to introduce deception and bondage into the Body of Christ.

In the case of Hebrews 13, there is some textual support in the Greek for using a noun, but in the balance of Scripture and with the other problems in Hebrews 13:17 it seems unwise and it leaves to much room for the Enemy to use it to his advantage.