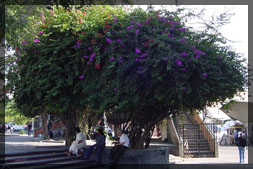 When I was in Romania in May 1992, I heard many good things about Alexandrou, a preacher who had started a church in his home. On May 3rd., the Lord stirred me to go to one of his services. They fellowshipped in a narrow, long hall in his very ancient home in Bucharest. The worshippers sat, packed solid like sardines in a can, on very narrow, uncomfortable benches. Although I folded myself as much as I could, I found not enough room for my long frame. I had received a wonderful Word from God that I longed to share. Although it seemed impossible, I prayed that the Lord would somehow make it possible for me to speak. The preacher said a few words and suddenly stopped. Looking around, he said, “Has anyone here a word from God?”

Spurred into action, through a Rumanian interpreter, I immediately voiced that I did indeed have a word from God. I came to the podium and shared the message God had given me. Wow! I could see on their faces that God’s message was being well received. We were blessed, thanks to God. Then I sat down.

After I delivered my message, brother Alexandrou also preached. Suddenly, he again interrupted what he was saying and–although he does not speak English–he said aloud, enunciating with perfect English pronunciation just one name,

Immediately he continued speaking in Rumanian as before. My interpreter kept whispering into my ear what he was saying, “I saw that name, Cliff, in letters of fire! God caused me to understand that the enemy is aiming at Cliff’s feet, seeking to cause him to fall.”

I happen to have a dear friend, a merchant marine officer and very gifted layman preacher named Cliff. At that very moment, Cliff was preaching in Brazil. Immediately I began praying for Cliff and asking others to pray also.

When I returned to the States, I was startled, but not surprised to receive an international long distance telephone call from Cliff. I immediately shared with him what had happened in Bucharest. Only then I began to find out details of the severe trial that Cliff was going through and how our parayers helped.

Cliff loves the Lord dearly and has an excellent message to share. No wonder the enemy is desiring to make him fall!

Heavenly Father, we pray for Cliff right now. Protect him from the wiles of the enemy. May he rejoice in You and in Your Word. Open doors for him to testify about You. Help him to lead people to a saving experience with Christ. Help him to encourage and train believers in the Lord. Help him in prayers, in righteousness, and in faith. In the name of the Lord Jesus Christ. Amen.

From Conversing With God – Chapter 10