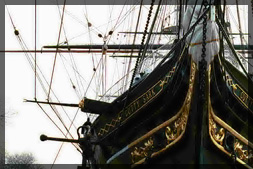 In November 1993 Ann and I flew to Kingston, Jamaica, to preach Christ. A lovely black couple received us and gave us wholehearted hospitality. He is from Nigeria, Africa. She is Jamaican. They make their home in May Pen. That town is famous for being the island’s largest concentration of voodoo and witchcraft organizations and practitioners. That is precisely why our hosts chose to make their home and ministry there. This reminds me of the answer Spurgeon gave to the question:

“If you could choose anywhere to set your pulpit, where would you put it?”

To which Spurgeon immediately replied:

“I would put my pulpit at the very gates of Hell!”

That is precisely where we seemed to be! Not only is it really hot and steamy, but the town is full of evil! At night one hears weird voodoo music in the distance. The island has some awful voodoo practices. Heard thrilling testimonies of how Christ brakes the chains of Satan’s followers. Garrisoned in Christ, we are protected and safe, blessed and encouraged. We are more than conquerors through Christ who strengthens us.

Invited to train 22 students at a Jamaican seminary/Bible school, I did. This was such a happy assignment. It thrilled us to experience God answering our prayers. The eager receptivity to God’s message in those dear young students is exhilarating!

As a result, we were unanimously invited to return to Jamaica to give them a further time of training and ministry.

British slave-traders brought a million Africans to Jamaica, so the population is predominantly black. The slaves successfully rebelled. This led to emancipation and eventually self-rule in 1944. Since 1962 Jamaica has been an independent nation. The national coat of arms bears the slogan: “Out of many, one people.” There is much poverty. However, we also saw far more well-dressed blacks than one usually sees in any city in America.

Jamaica’s Port Royal was known as “the wickedest city in the world.” It was the home of buccaneers and pirates, who led a very wild life in murder, looting and sexual immorality. No wonder Port Royal was destroyed by a devastating earthquake in 1692. The city crumbled, then slid into the ocean. It was an act of God.

Did you know that Northridge, the epicenter of the Los Angeles earthquake, is also the center of the enormously profitable American pornographic industry? Interestingly, most of that industry was destroyed in the quake. This also was an act of God.

“Heavenly Father, we pray for the Word of God we and others planted in Jamaica. May it bring an abundant harvest for Your glory in saving sinners and encouraging believers. In the name of the Lord Jesus Christ. Amen.”

From Communing With God – Chapter 3