Worshippers of the Goddess of the Sea 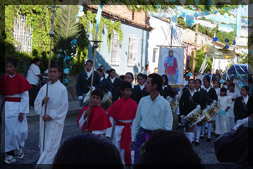 In 1990 my wife and I went to Brazil. I preached in Rio de Janeiro, which brings to memory this tiny grain of sand from the hour-glass of history and how I later had a part in it:

It was 9 p.m. December 31, 1978, when the little group of nervous Christians arrived at the beach. All around them, a steady trickle of demon-worshippers had been arriving also. By 10 p.m. the flow of arriving spiritists was growing into a river, then a torrent and finally, a flood of people, people, people everywhere. By midnight, on December 31, as far as Julio Pinto’s eyes could see, there were about one million candles burning in the sand. The spiritists, demon-worshippers, had come again to Rio de Janeiro’s Ipanema and Copacabana beaches to have their big demonic event. Every year they had been coming to have their New Year festival in honor of their idol Yemanya, queen of the sea. The spiritists chanted voodoo songs and danced in the sand, calling on the names of the many demons they worshipped. They drank huge amounts of casháza, a local hard liquor, as part of their ritual worship. The crescendo reached a peak when they waded into the Atlantic ocean, to send out to sea little hand-made boats, from ten to thirty inches long, stuffed with cheap trinkets as gifts to their goddess and paper lists of petitions to Yemanya. They actually believe that if their little boats sail out to sea, their petitions will be granted. But if the little boats sink or are brought back to the beach by the waves, well, they will have to wait a year and try again at the next spiritist festival!

Christians had always shunned to be even near the dark event, afraid of demons. But 1975 was going to prove different. My friend Julio and that small band of Brazilian Christian young people had also come, determined to evangelize! It was like little David challenging Goliath! This was going to be a historical event in the annals of Brazilian Christianity, but at that time they did not know that. Apprehensively, yet with determination emboldened by prayer, some of the young Christians took guitars out of cases and began singing verses of Scripture set to music, while the rest mingled with the surprised crowd of demon-worshippers and began sharing their personal testimonies of salvation, exhorting spiritists to repent and believe in the Lord Jesus Christ. Vile threats and loud curses was the average response, but they faithfully and lovingly kept preaching Christ and Him crucified for our sins. As the clocks nibbled at eternity in that long night, that faithful band of Christians were rewarded with several conversions.

By dawn, as the crowd of spiritists was ebbing away to go home to bed, hundreds of Brazilian children had come to dive into the waves to recover the cheap trinkets in the holds the scores of religious little galleons that had sunk with all the “treasure”, the trinkets, the hopes and the written petitions of the demon-worshippers.

Likewise, by dawn, through the faithful preaching of that little group of believers, a handful of spiritists had left the kingdom of darkness and had come to the kingdom of light, they had repented, the demons that had indwelt them had been evicted, the old things had passed away and everything had become new! These few, had abandoned Yemanyá and found the greatest treasure, the Kingdom of God and its King, our Lord Jesus Christ.

Emboldened by his success, Julio Pinto and this little group of believers returned the following year with reinforcements! God blessed them with even more converts, so they kept returning year after year to evangelize the demon-worshippers. Soon, all the other timorous churches began hearing of the exploits of this little corporate David tackling Goliath, so they said to themselves, “If they can do it, we can too!” Thus, more and more churches began sending their people to labor in the midnight harvest.

Today, Rio de Janeiro has 7 million people. Two million spiritists attend the end of the year celebration in honor to their idol Yemanyá. But now, thanks to God, just about all the churches in Rio participate in evangelizing the spiritists. The results have been most impressive. Now over 70% of the believers in Rio are those that were born again when as demon-worshippers they heard the Gospel through the personal witnessing of Christians. And it all began with a small little band of Christians who dared to go to preach the Gospel to the spiritists during their demonic festival! Truly destiny’s doors turn on very small hinges! Every year now, there is a fresh, new group of several hundred young Christian Brazilians, mostly students, that volunteer to join those that have been evangelizing the previous years during that festival. The number of testifying Christians is increasing yearly.

When I was in Rio, I was invited to teach at the inter-denominational training that every year prepares a fresh new batch of volunteers that will evangelize at the end of the year event. I stood on the platform facing several hundred of young Christians. I did not teach them a technique or a system. God simply caused me to preach Christ and Him crucified, resurrected, ascended and enthroned. I sought to bring them into a living, personal relationship with the Lord Jesus. Thus, they were enabled to witness to spiritists by the inner guidance of the indwelling Lord Jesus. The Lord Himself wanted to speak to the unsaved through them, for them and with them, just like when our Lord Jesus spoke, it was not Him speaking, but the Father speaking through Him. As I shared the message God gave me for that occasion, it was thrilling to see the eager receptivity of those determined young people. They were earnestly receiving the Word God gave me for them!

After Ann and I left Brazil near the end of 1990, it suddenly dawned on me that what they received from the Holy Spirit as I instructed those young people, was going to actually be used in Rio de Janeiro to greatly increase the Kingdom of God. It is as if I would continue to be preaching Christ in Brazil, through the mouth of hundreds of young Brazilian believers that God caused to hear and receive the message and training that God had given me for them! Thanks to God, the Living Word He gave me was going to be multiplied several hundred times in them, through them, with them and unto the Lord’s eternal glory! Wow! Yes, to God be all the glory!

And so it happened! On December 31, 1990, the Rio crusade to evangelize the two million spiritists at the Copacabana and Ipanema beaches mobilized 5,000 Christians from 80 different churches and mission groups. The outreach resulted in 3,000 conversions. Pray for the fresh harvest of new believers that every new year thus come to Christ. May they grow and be added to Bible-believing churches.

From Dialogues With God – Chapter 3